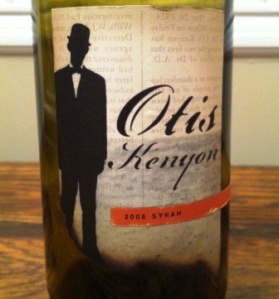 One of the amazing things about wines is the stories behind their creation.  Winemakers clearly love their craft and work very hard to create wines that are beautiful to look at, pleasant to smell and exceptional to drink.  From the names of the wineries to the labels on the bottle, it’s more than just chemistry and marketing.  There always seems to be a story behind the name or a story behind the vineyard or even a story behind the winemaker.  In the case of our wine tonight, we’d say that all three come together to tell a terrific tale.

If you look closely at the label of this 2008 Syrah from Otis Kenyon in Walla Walla, Washington, you can see what appears to be burn marks.  As we were told the story of the label, it piqued our interest, so we went to the website to learn more.  According to the site, “A young man, James Otis Kenyon, was a struggling dentist practicing in Milton-Freewater, Oregon. When a new dentist moved to town, James, for reasons that remain a mystery, burned his competitor’s office to the ground. After much speculation and a lengthy investigation, James spent a short period of time providing superb dental care to the staff and patients at a nearby hospital.  Ostracized by his wife and presumed dead by his two sons, the family moved to Walla Walla, Washington. Robert Otis Kenyon, the eldest son, never spoke of his father even to his son, Stephen Otis Kenyon. Yet, almost exactly 50 years after the incident that began the family legend, Steve discovered his grandfather living quietly on the Oregon coast.  James was reunited with his sons and became a joyful part of their families living long enough to witness the birth of his first great grandchild, Muriel. Although he passed on at age 101, James would have delighted in the birth and naming of his great grandson, Samuel Otis Kenyon.  Today, in tribute to four generations of Otis Kenyon’s each with strong ties to the Walla Walla Valley, owners Stephen Otis Kenyon and Deborah Dunbar have returned to the area to make wine.  In honor of James Otis Kenyon, the label bears his silhouette”.  That is a pretty awesome story, and the good news is that the wine is every bit as interesting as the story!

We agreed that the nose of this wine upon opening hinted of dark fruit . . . prunes, plums, black cherry with a slight kerosene/alcohol scent, but as it opened up the fruit became much more pronounced even transitioning to a floral/lavender aroma.  The taste was big and bold – which you’d expect from a Syrah and the finish was long and fruitful.  We enjoyed this wine with some cheddar cheese and spicy, dry-smoked sausage, and it held up quite well.  Now, we’ve never been to Washington, but have reviewed a couple of wines from there, (makes one think of the song sung by The Blue Dogs  – “Well I never been to England – But I kinda like the Beatles” – sorry, digressing again), and now with family in the state, we have a great reason to go and try some of their wines.  It’s amazing how far your dollars go with many wines from Washington, and although this one was priced in the mid-$30 range, you get good to great wines for better than expected prices.  So, if you’re looking for a special occasion treat, then reach for the Otis Kenyon;  you won’t be disappointed.

Chores are done and dogs are worn out – must the end of a weekend.  As we gaze ahead to the work week, have a good Monday and we’ll be back here tomorrow with another wine.  Cheers!

As always, please enjoy responsibly and recycle whenever possible.