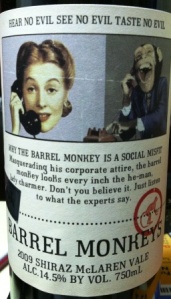 Barrel of Monkeys is a toy game first created by Lakeside Toys in 1965. Today it is produced by the Milton Bradley Company. Milton Bradley’s editions consist of a toy barrel in either blue, yellow, red, or green. The barrel contains 12 monkeys, their color usually corresponding to the barrel’s color. The instructions on the bottom of the barrel state “Dump monkeys onto table. Pick up one monkey by an arm. Hook other arm through a second monkey’s arm. Continue making a chain. Your turn is over when a monkey is dropped.” In addition to these basic instructions, the barrel also contains instructions for playing alone or with two or more players.

Baseball is a lot like Barrel of Monkeys .  .  . you have to keep going with one player after another and hope to score some runs with hits and more hits.  In tonight’s NCLS Championship Series Game 6, we saw how good pitching stops good hitting and one hitter with “the touch” can affect others on the team.  Vogelsong on the Giants was almost unhittable and Scuttaro and Sandoval were the players with ‘the touch’.  We really love baseball – as many of our previous blogs have echoed – because even though it’s a team game, the concept relies on individuals to step up and perform when least expected.  What a game!!

So, tonight we enjoyed a 2009 Barrel Monkeys Shiraz from Australia – specifically from the McLaren Vale which is known to produce some outstanding, full-bodied shiraz and blends.  Barrel Monkeys is no lightweight wine; this is big, bold and ready for you to test your wine tasting prowess! Some of these Australian wines are amazing in that their fruit is so bold and flavorful, but at the same time there are amazing wine making techniques as well.   There is a terrific smokiness on the nose along with big ripe black cherries and currants.  The taste is long and luscious and it’s in the same vein as a previous wine from Australia that we raved about, Ball Buster.  We enjoyed this wine with smoked gouda, white cheddar cheese, havarti with dill, crackers and vegetables and it was nothing short of amazing.  For around $15 bottle, you get a whole lot more for your hard earned money .  .  . it’s almost like a meal!  We could see this wine with barbecue or steak maybe even fajitas  –  definitely a wine meant to be enjoyed with food.  But, one of the constants with Australian wines is their drinkability.   We think that this wine could easily be a deck wine to be enjoyed on a cool night with a fire in the pit or on the patio with friends.  Yep, it’s that good and with a great price point, you can enjoy this as one of your regular wines.

We first sampled this wine on the deck of Grape juice when it was a start-up operation in Ingram – this past weekend Patrick and Keri celebrated year 3 in their new home.  Hats off to these two – a prime example of small business at its finest . . . if you are ever in the area – stop bu, well worth the visit.

We can remember when the girls played Barrel of Monkeys and the fun times that they had trying to connect as many of them as possible without breaking the “chain” of monkeys.  It’s definitely a game that not only improves your mechanical abilities but it also helps with your counting too!  Unfortunately, tonight the Cardinals didn’t play like a barrel of monkeys and now we are going to watch Game 7 tomorrow night.  It promises to be an exciting end to the NLCS, and hopefully, a return trip to the World Series for the Redbirds.  Hmmm, competing for the attention of the public will be the final Presidential Debate prior to the election – talk about a barrel of monkeys!!! Regardless of the outcome(s), we’ll be ready to enjoy another taste of Barrel Monkeys because no matter who wins or loses and no matter who’s elected or isn’t, there is always time for a great glass of wine.

Please remember to enjoy your wine tasting responsibly and recycle whenever possible.