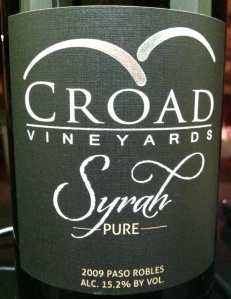 Day 60, WOW – almost two months into our 12 month sojourn of trying 365 different wines in 365 days.  We have to confess, this started out as a passion for wine, but after two months, it could be a labor of love!  60 – sixty seconds in a minute.  60 – sixty minutes in an hour.  60 – the number of home runs hit by Babe Ruth during a 154-game season; it’s been broken three times since by Roger Maris, Mark McGwire and Barry Bonds.  60 – the age for a senior citizen in some cultures, clearly not ours where Social Security qualification keeps going up and benefits keep going down.  60 – the common speed limit for a large number of highways in our country – but NOT the new Highway 130 in Central Texas where the speed limit is 85 – – – YES, that’s right the posted speed limit is 85.  60, as in 60 Minutes – that show has been on the air since 1969; it has seen more reporters than most television stations and keeps on “going” like the Eveready Bunny!  60-the number a car accelerates to from zero to show performance “The car went from 0 to 60 in 4.1 seconds.”

We could go on and on – the fact is that 60 is a significant number no matter how you describe it.  When we started this blog on September 1st, we weren’t thinking about 60.  We were thinking about August 31 of NEXT YEAR!!!  But, in order to get to that date, we’ve got to make it through tonight, tomorrow night, next week, next month, the Holidays, the Spring, the Summer—whew, it wears us out thinking about what we’ve signed up to do!

So tonight we’ve called in the heavy artillery .  .  . one of our stops in the recent trip to Paso Robles, California was at Croad Winery. Who could pass up an invitation that offered, “Come on up for a visit down under!”?  Not us–a beautiful tasting room (complete with the Cowboys playing the Ravens in Baltimore on the big screen), and the weather was magnificent.  We learned a lot about Croad wines and vines…for example, their “wines are produced primarily from estate fruit surrounding the winery. The vineyards are planted on south facing hills, maximizing sunlight exposure while minimizing the chances of frost damage. Planted in this special micro climate, rooted within calcareous soils and nestled in the center of the “Templeton Gap” area, brings unique fruit characteristics to the wine. The vineyards consist of Zinfandel, Grenache, Mourvedre, Syrah and Petite Sirah vines.”

We opened a 2009 Syrah from Croad Vineyards, and we have to tell you–this is AWESOME wine.  The smell of the cork was the first indication that we’d hit a grand slam with this wine.  It exhibited beautiful oak and black cherry notes–and this was before pouring the first tasting.  The wine poured out like velvet with long legs and deep purple hues.  Putting our noses to the glasses and we were immediately entranced by aromas of toasted oak, big blackberries, a beautiful rolled cigar from fine tobacco – the essence of a great wine is in the nose, and this Croad didn’t disappoint!  Next came the initial tasting–somewhat reluctantly because the aroma was so beautiful we didn’t want to be disappointed by the taste!  Good News–the taste OUTDID the nose!  Yep, what a smooth, silky, incredible tasting experience we had with this wine.  To be totally honest, we’re not sure if this wine is available commercially or only at the winery, but this is a MUST TRY wine.  When we tasted it at the winery, we thought it was good, but not THIS good.  Perhaps because we combined it with a meal of sauteed chicken breast in garlic and olive oil combined with pasta shells and garlic, roasted red peppers, mushrooms and black olives for a beautiful complement to the big wine taste.  We both agreed that the addition of capers and artichoke hearts the next time would intensify the flavors even more.

You know how it is–try different wines and who knows what can happen.  Sixty days into our odyssey, we’ve tried 60 different wines and been mesmerized by some (like tonight) and disappointed by others.  The beauty of this journey isn’t just to taste wines that we already know and like; our goal is to really try a huge variety of wines with the knowledge that some are going to be good, others great and still others–not so much!  And, as we wrap up day 60, thank you to all who have hitched their wagons to our stories.

With 305 days to go, it’s going to be a fun ride, but always remember to enjoy your favorite wine responsibly and recycle whenever possible.