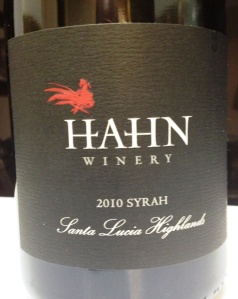 Tonight won’t be too long – after a busy weekend with friends and family, and both feeling a bit under the weather with allergy fog – hopefully not the flu – we decided to wrap up early tonight, take some meds and hit the sack.  Hopefully, a new morning will find us back on the upside of things.

Having previously raved about Hahn Winery’s Executive Chef, Brian Overhauser – especially after his cooking school trip to Austin last month – we thought that we’d actually sample some Hahn wine for tonight’s blog.  With it being the Monday after the Big Game . . . we needed something with zip, pizzazz and a kick! Don’t know about you but we’re guessing the talk around the water coolers today wasn’t about the game.  Oh, it was entertaining as we mentioned last night with the victors holding on in the final seconds to win the game, but between the commercials and the power outage, we think there were more than a few discussions being held.

Interestingly, some of the commercials resonated better with older viewers than younger and some hit their mark more with women than men and really only a couple hit on all cylinders and left enough of a lasting impression that could actually help their company’s business.  The first is of course the Clydesdales from Budweiser – now, selling beer is an art and the folks at InBev/A-B have refined it to perfection, but the Clydesdales’ spot was just flat out awesome.  But, the Jeep/USO spot at halftime was probably one of the best filmed and most emotional of the evening.  Watching a football game is something we do every fall into winter.  We take it for granted . . . from high school to college to the professionals . . . we don’t think twice about watching a football game, and yet, like the Jeep spot said, ‘you’ve been missed, you’ve been needed, you’ve been prayed for – all for the women and men of our Armed Forces.  We can’t even begin to appreciate the sacrifices made by these heroes – sacrifices in their jobs, their families, their hobbies and their lives.  Children have grown up with one or both parents shipping out on tours of duty.  We were touched by the spot and although there were a bunch of good ones . . . this one helps remind us that we’re all still in it together.

So, heading back out to the Central Coast of California . . . we visited the beautiful winery of Hahn Estates.  As previously mentioned these wines are spectacular, and getting better.  Our bottle of 2010 Syrah from their Santa Lucia Highlands vineyard is a great example of a good wine getting better.  This “Winery Exclusive” Syrah was made in small lots specifically for Hahn wine club members. Sourced from their Doctor’s Vineyard in the Santa Lucia Highlands, this wine bears all the character of cool climate Syrah, dense blueberry and white pepper aromas and a smoky hedonistic character on the palate that is reminiscent of a Cote-Rôtie from France’s Rhône valley. Only 228 cases produced.  From our perspective, you should join the Hahn Wine Club to get a hold of this wine.  The color is spectacular – deep, dark purple, the body is medium to full and the nose is classic syrah.  We loved the taste – so much fruit and a toasty note that was just amazing.  Wines like this are reasons why wineries have clubs, you appreciate their special attention to details and get to benefit from them.  We found it to be the perfect wine to start the work week  . . . or wrap-up the football season.

Grab a glass of wine and sit down at your computer and enjoy re-watching the commercials from yesterday.  Sure it’s a bit indulgent to just sit back and watch them again, but hey, you deserve a little indulgence – and wine helps with that as well! Safe travels to S and S as they leave the land of sunshine and 80 degrees and head back to rainy, gloomy Seattle.  Hope to see you soon!

Just remember to enjoy it responsibly and recycle whenever possible.