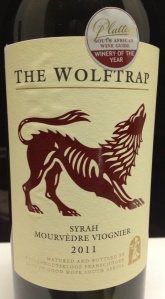 We’re digging them out of the past for tonight’s blog…with a name like Wolf Trap…well, it just BEGS us to do this!  Okay, so here’s the first one. . .what group sang this song?

Very nice. . .for those of us old enough to remember–good stuff, and those not old enough, welcome to our classics!!  Alright, next up,

Scott Howard: Styles, I got something to tell you. It’s kind of hard, but…I’m… a werewolf

Hmmm, that’s going to be a tough one to pull off. . .but there’s one more to complete the trifecta!

I saw a werewolf drinkin’ a pina colada at Trader Vic’s And his hair was perfect.

Don’t get caught in the trap!  A hint—two songs and one movie. . .okay now that we’ve set the table, it’s time to serve up the main dish!

The Boekenhoutskloof estate was established in 1776.

Located in a far corner of South Africa’s Franschhoek Valley, the farm’s name means “ravine of the Boekenhout” (pronounced Book-n-howed). Boekenhout is an indigenous Cape Beech tree that’s greatly prized for furniture making. In 1993, the farm and homestead were bought and restored, and a new vineyard-planting program was established.  The winery now makes an array of exceptional wines, and there’s an interesting story behind “The Wolftrap” label. When the farm was founded, the Franschhoek Valley was far wilder than it is today — as the wolf trap once discovered on the property illustrates. Today, the mountains are still alive with indigenous animals, including the majestic leopard.  No evidence of wolves has ever been found, however, so “The Wolftrap” was created as a reminder of the mysteries and legends of days gone by. “The Wolftrap” Red is a rich, deep and delicious cuvee — a legendary wine in the making.  You gotta love it!

We did. . .we were completely caught off guard on this one.  A $9 bottle of wine that tasted and reviewed like a $25 or $30 bottle of wine.  It’s yet another example of the world-wide phenomenon of wine making.  South Africa continues to make a name for itself here in the States, and even though their wine still has a ways to go, many of their labels-including this one-have potential written ALL over them!  It’s a beautiful blend of 65% Syrah, 32% Mourvedre and 3% Viognier. . .the Syrah brings a richness to the wine while the Mourvedre gives it a fruitiness. . .across the board, this wine has more to offer than many of its more expensive ‘cousins’.  Intense red color with a purple rim. A spicy profile with ripe black fruit and violets. Smooth and rich on the palate with soft tannins, good density and a hint of oak. A well balanced, unpretentious wine made for easy drinking.

At this price point, we should be worried about a wine that’s too sweet or too tart or not blended right.  Seriously, at this price, people who opt for Barefoot or other labels at the same pricing level are missing the opportunity to not only try something new, but try something new from South Africa!  Which now leaves us to the answers to the questions at the top of tonight’s blog.  If you were paying attention you’d know that #1 is: ‘Clap For The Wolfman’ from Burton Cummings and The Guess Who in 1974!   Oh, so close!!

#2 would be Scott Howard–aka Michael J. Fox– from the original 1985 Teen Wolf!  We still remember the scene where he’s ‘surfing’ on top of a cargo van through the middle of town!  Yeah, like that would ever play today!!! NOT!

Finally, #3–probably one of the best written and performed songs of the late 70’s from Warren Zevon. . .Werewolves of London a classic to this day!!  We mean–who else can write lyrics like this: ‘He’s the hairy handed gent who ran amok in Kent,  Lately he’s been overheard in Mayfair.  You better stay away from him,  He’ll rip your lungs out, Jim,  Huh! I’d like to meet his tailor.’  Seriously, you can’t make this stuff up!!

We hope you’ll try tonight’s wine.  It’s a value for the money; it’s got big bold fruti flavors and it’s got a GREAT name!  The 2011 Wolf Trap blend is a nice young wine that should be added to your wine loving blog!

As always, enjoy your favorite wine responsibly and remember to recycle whenever possible!