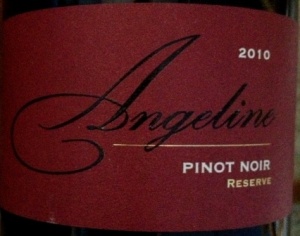 Back on Day 19 we blogged about a wine called Sea Smoke Southing Pinot Noir.  This bottle had been given to us by Jean’s Dad – by now you know him as Bill.  As it turns out, this Pinot was a favorite of Bill and Jean’s Step-Mother Pat – needless to say this is one of the best bottles of wine we had ever tasted . . . smokey and yet smooth as a rock tossed about in the sea . . . so we weren’t surprised that this wine was special to the two of them.

Today is the second anniversary of Pat’s passing on the a much better place (ironic that it’s the 19th of August and we blogged about her favorite wine on Day 19) – she had been part of the family for over 16 years and was Nana to D#1 and D#2 (as well as the other five cousins on Jean’s side).  It goes without saying that Pat is missed by many – she had a sense of humor to beat the band, a twinkle in her eye that told you she was up to something mischievous – and a laugh that was infectious.  Oh the stories we could tell of her life adventures.

She was a strong woman of faith and held others accountable for their actions – something we should all do.  Never afraid to speak her mind, but always willing to listen to the “other” side of the story.  In a nutshell, she was a wonderful woman and role model to many – missed and loved by those who knew her.

So tonight in honor of Pat, we opened a 2010 Angeline Winery Pinot Noir Reserve.  This wine is a “county blend” – with 36% of grapes coming from Sonoma County, 34% from Mendocino County and 30% from Santa Barbara – all CA, yet another reason Pat would love this wine.  Produced at the Martin Ray Winery which has an interesting history – Martin Ray Winery’s Founder Courtney Benham acquired the historic Martini & Prati winery in July, 2003. The tasting room structure, which dates back to the 1900’s, used to serve as a stable and bunk house where Italian immigrants stayed during harvest. Established in 1881 as the Twin Fir Winery, the historic site is distinguished as the oldest winery in continuous operation in Sonoma County and one of the oldest wineries in California. The winery was able to stay in operation during prohibition by selling sacramental wines by train to San Francisco and points beyond. Martini & Prati Winery, which was established in 1902, was run by five generations of the Martini family until July of 2003, when Martin Ray Winery’s founder and proprietor Courtney Benham purchased the facility.

According to their website, the 2010 harvest was one of the strangest growing seasons on record. The long, slow, cold season had the winery about 3–4 weeks behind schedule, with a small window of time to bring in all the fruit. Although the season was bizarre, it was the harvest of “super berries.” Due to moderate ripening at cool temperatures, the grapes retained good levels of acid and are very balanced fruit that has achieved ripeness at lower brix…you know, the amount of sugar. Therefore, they had lower yields of fruit, with lower alcohol and sugar levels, great color and amazing flavors.

This wine was surprisingly beautiful from the nose to the finish.  Popping the cork produced a nose full of toasted oak . . . wow!  On the palate – toasted oak with hints of berries, green pepper and a slight note of pepper.  The finish was just long enough – nothing over the top – but plenty for us.  For a blended Pinot, we were amazed at the flavor and the finish.  We enjoyed it with smoked chicken leg quarters and corn on the cob and we have to tell you that it was a perfect pairing!  But, with a versatile wine, you can work with just about anything!  We picked this one up at Twin Liquors for less than $20 – always a great place to pick up a bargain.

It’s a good wine . . . a good value . . . and for the money, you’ll be glad you tried it.  Remember to hug those you love the most tonight, and every night – for they make us who we are and most days even more than that!  As we ease from Monday into Tuesday, remember to enjoy your favorite wine responsibly and remember to recycle whenever possible!